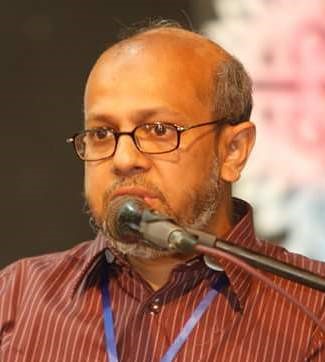 Abdullah Shams Bin Tariq has been working both in nuclear and particle physics.  In nuclear physics, he has worked with the Nuclear Research Group at Rajshahi using the energy density functional with Pauli effects to extract novel shallow non-monotonic potential that solve many problems in nuclear interactions. In particle physics, he has worked in lattice QCD, working on one of the earliest unquenched calculations of BK, a spectroscopy calculation of double-charmed baryons.  He is also interested in fine tuning, heavy multiquarks, nuclear potentials from lattice QCD etc.  He has also contributed to science, or research capacity in general, through his pioneering efforts in establishing the Library Consortium of Bangladesh – LiCoB, for which he has visited dozens of institutions and trained hundred of librarians and academics. He and his students have also established a prototype high performance computing cluster facility Arun at Rajshahi. He served on the EC of the Global Young Academy for two terms and led a working group on Global Access to Research Software.  He has published in JHEP, Phys. Lett. B, J. Phys. G, Phys. Rev. C and D, Nucl. Phys. A,  Europhys. Lett., Eur. Phys. J. A etc.